The building that is the Albany Theatre main house was originally built as a lecture theatre. Called the Great Hall, it sat at the heart of Coventry Technical College, which opened in 1935.

Coventry was a world centre for engineering in the late 19th century. As technology became more complex, the construction of machine tools became more specialised and the need for a better-trained workforce grew.

In response, Coventry ‘s new Technical Institute was opened in 1888 in an old textile warehouse in Earl Street. The buildings were never best suited to this use, and so in the early 1900s, plans were drawn up to flatten the building and build a new one on the same site, but this proved to be too expensive. Various other sites were considered, and Pool Meadow was selected. However, with the outbreak of the First World War, no further progress could be made.

In 1919, the City Council acquired three acres of land at the corner of Albany Road and Butts as a site for the new building (bringing together the Junior Technical School, providing apprenticeships for boys who were not academic enough for the National Diploma, and the Institute).

The name Butts comes from when the land was used by archers for practice (Edward IV having passed a law in 1477 – never repealed – making it compulsory for all males to own a longbow and to practice on Sundays after church. Butts are mounds of earth along which the archers could shoot.

In 1926 the Institute qualified as a Technical College and changed its name. Coventry led the country in day-release apprenticeships with 500 registered in 1931. The College was now providing courses for every level up to final honours degree.

Work began on the building of the new college in August 1933, and a time capsule (messages in a bottle) was buried under the front steps by the workmen, which was rediscovered in 1995. 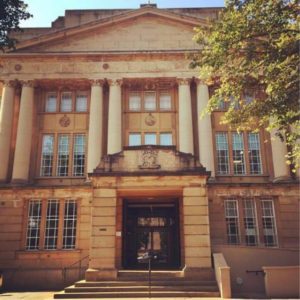 On 10th July 1934, HRH the Prince of Wales visited the building under construction. The College was formally opened on 10th December 1935 by the Duke of York (later George VI).

During the Second World War, trenches were dug in the sports ground and special courses were run in fuel efficiency, economical bread production and the making of wartime gym shoes. The iron railings at the front (which had cost £600) were lost to the War effort and the nation’s need for scrap iron for a paltry £30. The College never closed during this time and after the heavy bombing in November 1940, hundreds of homeless citizens were housed at the college. Bombs were dropped on the building, but it escaped with little damage.

The Council for the Encouragement of Music and the Arts used the Theatre through the War Years to entertain the public with concerts and other events.

Workers at car factories like Morris Motors organised amateur play performances; arts societies organised drama competitions; musical theatre societies thrived; dance companies and schools used it well, as did of course students studying at the College. The theatre is mentioned in “The Art of Coarse Acting” from when it was home to several drama festivals. Some of the City’s biggest stars began their careers at the theatre; most importantly, thousands of young people had their first taste of performance there, which explains the passionate nostalgia for a bygone age and support for a vibrant future.

The theatre underwent major refurbishment in the late 1980s with the construction of a counterweight flying frame and powered flying winches as well as a major electrical rewire of the stage lighting, financed by Coventry City Council. But then the future of the building as a theatre came under significant threat during the 1990s.

As Carol Bloxham notes, in her 2008 history of the College, the Technical College faced acute financial pressures, attributed to the inability of College Management to manage the budget that was handed to them when colleges were taken out of local authority control. When in 1991 it came to light that the Technical College had lost somewhere in the region of £3 million in its accounts the Principal, John Temple, who had been in office since 1984, resigned along with members of the senior management team. Keith Wood, then Theatre Manager, fought a determined battle, strongly supported by local amateur groups, to prevent the theatre from conversion to premises to house “new-fangled” computer suites. Although Arts Council England awarded a substantial lottery grant in 1997 (£365,000) for the “Refurbishment of Community Theatre” the threat to the theatre’s survival was real and constant.

The passion of the campaign to save it, led by Alan Biddle and Coventry Musical Theatre Consortium, persuaded the City Council to impose a “Section 106” planning condition when the College building was finally sold to developers that aimed to ensure the theatre would be saved for the community. When Coventry Technical College – then known as City College – moved its final students across the city at the end of 2008 the theatre closed its doors and went dark.

THE BIRTH OF THE ALBANY THEATRE

The S106 required the site’s new owners (and successors in title) to establish “the Butts Theatre Trust” (a charitable trust that would operate the re-opened Theatre) “as soon as is reasonably practical” following the appointment of a “Theatre Development Manager”.

Once established, the Trust set about bringing the theatre building back to life. Allowed access in June 2012, a small army of volunteers (many who had been involved in the campaign to save the theatre) planned and carried out restitution, repairs and developments. An estimated £100,000 of time and donated materials, supported by residual grant funding of around £50,000 from Coventry City Council, led to a formal re-opening of the auditorium on February 1st, 2013.

For over 12 months, the theatre was entirely volunteer-led and managed. It became increasingly clear that this was not sustainable; for the theatre to grow to the point where revenues comfortably exceeded core costs, it had to employ some paid staff. Whilst this would increase costs it would also increase the capacity to bring in events to generate revenue. A full-time, paid Theatre manager was employed in June 2014.

A threat lurked in the background. The S106 that had saved the theatre included plans for the demolition of the rear of the building. The reconstructed building would be significantly restricted, making it impossible to accommodate anything other than small-scale productions. In addition, the overall plans made no formal allowance for a foyer/bar area, and the concession to provide this in the existing foyer area could be removed at any moment. The solution was to lease additional space, in return for which the existing footprint at the rear of the theatre could be retained for redevelopment. 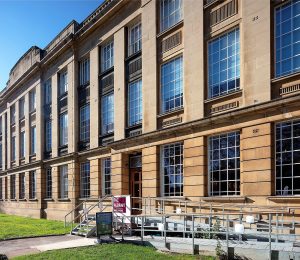 The Trust had to develop a business plan that sustained the additional costs of the additional space. Acutely aware of the need to ensure that development of the space had to meet local and city-wide needs, the Trust committed to a comprehensive consultation once the space was secured. To secure the space, the Trust articulated a vision “to promote well-being through Arts for Life” and mission to “Cultivate Inspire Create”. This reflects the fundamental belief that whatever shape the new development takes it is about people not about buildings.

Embracing and promoting their new vision, the Trust embarked on a course to increase the range and quality of events presented at the theatre and to prepare to grasp the opportunities presented by securing the additional space. The single Theatre manager role was replaced by a team of paid staff directly supported by Executive Directors.

Those new owners were in place by June 2015, and by mid-August they had accepted the Trust’s proposals in principle. The condition was that the Trust had to secure the support of a guarantor to underwrite the lease. The owners wanted that guarantor to be Coventry City Council, who were at that time facing the deepest cuts to their finances ever.

Almost two years had passed when signed documents were finally exchanged, on May 25th, 2017, that secure the future of the theatre and the use of the new space for 25 years, with an automatic option of an extension for a further 25 years.

The Albany is proud of its home at the beautiful Art Deco theatre in the heart of Coventry and the new studio space staging inhouse and professional touring dance, drama, music and comedy productions.

The beautiful Art Deco main house theatre is now joined by a brand-new studio space and the new foyer entrance into the spectacular building includes a bar, convivial meeting area and box office with plans to develop the space further to include a café and gallery.

The theatre is now a thriving arts venue. Run as a charity by a professional core staff with assistance from a team of volunteers, the Arts for Life initiative has a burgeoning reputation for providing visitors and local communities alike with a flourishing theatre and music scene that promises to make a valued contribution to Coventry’s UK City of Culture status.

There is now a full programme of performances, events and activities to suit all ages ensuring that the theatre remains a flourishing arts venue for the benefit of audiences and communities throughout the city.

The theatre plays an active role in the cultural life of the city; the Arts for Life initiative encourages participation from volunteers of all ages and abilities – front-of-house, administrative and technical departments all rely on support from the community and the theatre is keen to promote the wealth of benefits for all involved that are evident from engaging in the Arts, whether enjoying the variety of performances on offer or actively contributing to help stage them.

We can arrange tours of the theatre for pre-bookable groups and open during the run of Heritage Open Days for opportunities to see the theatre both in front and behind the scenes. To find out more, please get in touch. Visit the website www.albanytheatre.co.uk for contact details where you’ll also find full listings of season performances now booking and information on how to get involved.